Late again! I know, I know. I will be better! I got distracted by the Oscars on Sunday and then spent a full three days thinking about the sheer perfection that was Jennifer Lawrence and Adele and Michelle Obama. But I'm back! Let's get down to business.

So for Week 8 we are into blocking plus, which means we are out of stepped, which means this is the scariest and most stressful part of my workflow. It's gotten significantly less scary since I started AM but it's still unsettling to see your work splined for the first time and worry that all the good things you put into your blocking have been lost to Maya's unfortunate inbetweens. And while this week was a bit rougher than the past few, I think I've got the bones of what I want in there now and can start cleaning up and polishing. See for yourself:

Mike gave me Blocking Plus approval and had a few notes on what to focus on as I begin polishing, namely some spacing issues with Stewie's limbs as he swings around. But all in all, I feel as though I am in a good place and am moving forward, which is always nice. Now I really need to get down into the detail of each shot and start polishing all the little things. Come back next week and see how I did!
Posted by Janel Drewis at 3:55 PM No comments:

Okay, so I lost all the points I built up last week for being on time with my post. I am late this week, I know I know! Slacker. Heh.

Since we're late, we'd better get right to it! This week we're in final blocking for my three shots. Everything's still in stepped, but I cleaned things up and tried to get as specific as I could with my poses. I've got a pose on at least every fourth frame, which is a blocking technique I picked up from Marlon last term and has worked well for me so far. Take a look!

That third shot has been giving me trouble. Getting it to what you see there was tough. NEWS FLASH: Swinging is hard to animate. Overall Mike was happy with it, with just a few minor notes on the hand shot and some body language notes on the the third one (MOAR TENSION!) Other than that, I'm free to spline ahead and get into Blocking Plus next week. So if my brain hasn't leaked out of my ears by then because all the goodness that you see in stepped mode has disappeared, I'll see you then, readers.
Posted by Janel Drewis at 12:58 AM No comments:

Oh hello! Look how on time I am this week, you guys. Super on top of it.

So, for this week, we continued working on our shots, heading into rough blocking. I am very happy that we get to split up our blocking over two weeks, so that we can address notes in the coming week without having to worry about going out of stepped just yet. Take a look!

Still pretty messy but I like how it's shaping up, especially across the cuts. Looking at it now I think I might have put too much overlap on his body when he's swinging in the third shot, but it's always easier to reign it in than push it further, so I pushed it more than I normally would have. We'll see what Mike thinks of it tomorrow!

Aaaand Lady Animators has a few new interviews up if you want to take a look! Most recently I spoke with Amelia Lorenz, an animator at JibJab and all around lovely person. Okay lovelies, that's all for this week. See you next time!
Posted by Janel Drewis at 12:20 AM No comments:

I know we're already well into Week 6 but I had to take a few days to get over the Niners Superbowl loss. I've decided to just focus on the fact that Spring Training is starting and the Giants will soon be back on my television.

So for Week 5, we had to do shoot reference, do planning sketches, and do rough character placement for our shots in the sequence. I had a biiiit of extra work since I have three shots instead of two like most of my class, but it wasn't too bad and my extra close up of Stewie's hand is actually a lot of fun.

My three shots are fairly straightforward. The first being where Stewie is climbing up the cliff face, the second is the close of his hand slipping, and the third is him dangling from the cliff and looking down. I cobbled together some video reference from clips I found on YouTube so that I could start drawing. For the dangling shot, one of my classmates kindly shot reference for me, thanks Michael! Take a look!


I am very glad I was able to find good reference because there is no way I would have be able to shoot any of this myself. I can't even do a pull-up. Zero upper body strength over here.

So, once I got my reference together, I got to drawing. I knew I wanted to exaggerate the poses a lot for this and make it as dynamic as possible. Actual rock climbing is really slow and controlled, but I wanted to give Stewie a little more energy, even a bit of recklessness, and I tried to convey that in my drawings. Here, have some thumbnails: 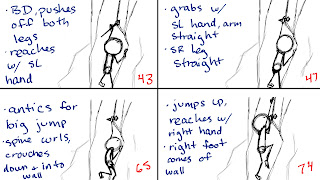 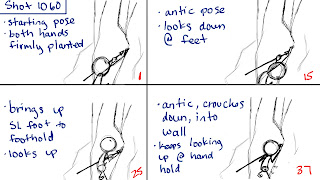 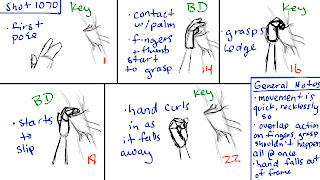 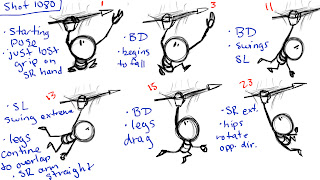 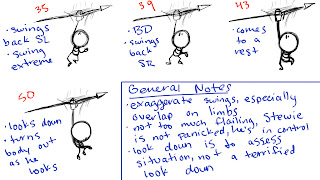 So now it was time to dive into Maya. Another of my classmates made an awesome Tarzan mod and spear for Stewie, so that is what will be used in our sequence (thanks Brock!). I can't even really call this blocking since it is still so, so rough, but the general ideas and groundwork is there for my three shots:

Mike had a few minor notes, including some small camera changes and having Stewie's hand enter frame in my second shot, but his main note, really for all of us, was to be specific about the way that Stewie moves. If he's like Tarzan, he should have a very unique style of movement and locomotion that we all need to agree on and really communicate in each of our shots. So, as I start blocking, there is a lot of work to be done, but I'm excited to get to it! See you next week with some blocking, readers!
Posted by Janel Drewis at 1:16 AM No comments:

Welcome to my blog. I hope you like animation and comics and food because there's quite a bit of that here. So get a snack and settle in.