Oooooh, hey guess what? On Friday, I got some very, very exciting news: I found out that I landed an internship at Telltale Games! After I got off the phone, I ran around for a full five minutes like a crazy person. Then I celebrated by making myself an extra garlicky pepperoni pizza for lunch. It was delicious.

Starting at the end of this month, I'll be working as an Animation Intern at Telltale Games in San Rafael. So not only do I get to move back to my beloved Bay Area, I get to work at a video game studio that is doing some very exciting and unique work. They are best known for The Walking Dead, an adventure game released last year to much commercial and critical success (it's awesome, you should play it. It's the kind of game that stresses you out but in a good way). They've also made games based on Back to the Future, Sam and Max, Monkey Island, and are currently developing a game based on the Fables comic book series. All very exciting things that are right up my alley!

But this comes with a bit of a curveball. Since I have to move and get myself settled into a new job in the next month, I decided to take a leave of absence from Animation Mentor this term. I was really enjoying Nick's class so I am pretty bummed I have to put AM off for now but I am planning to come back for the upcoming summer or fall term and hopefully take Nick's class if he's still teaching Intro to Acting. With such a great teacher and awesome classmates, I wish I could stay on this term without my head exploding but I just don't think that's possible.

I will keep blogging when I can so check back every so often for updates! See you soon.
Posted by Janel Drewis at 11:41 PM 2 comments:

Hey look it's another Week 1! Are you ready for some shot planning? Hope so because that's what you're getting.

So for our first shot this term we've been assigned a pantomime shot. We have to animate some kind of change from one emotion to another, all through body language. Nick stressed to us that we should really be viewing this as an exercise in animating a thought process, not just getting a sad character's body language to look right (though that is also important). The audience should be able to see a "gear change" in the character's head when you watch this shot.

So after lots of brainstorming, I came up with the idea of my character running late for her flight. She runs up to the departure board, clearly panicked and scrambling to make it on time. She looks up at the departure board, searching for her flight, and sees that it's on time, meaning she'll miss it. But then, the flight status updates, and it's delayed. Her panic changes to relief, she's gonna make the flight after all.

And if you're wondering whether this idea was inspired by my trip to Boston, which took me to several different airports on several different flights, you are correct! I'm not a stranger to the feelings of stressed-out air travel. After I nailed down my shot idea, I shot some video reference and pieced together the best bits:

Yay awkward acting! Hehe. Once I got my reference together, I thumbnailed out some poses based on my ref, which you can see here: 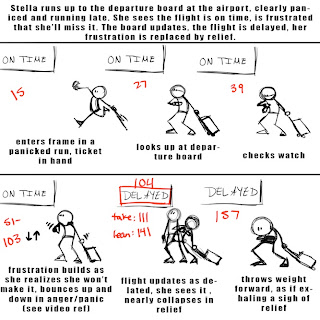 I do wish we'd had two planning pages instead of one for this assignment, but I was able to get the major storytelling poses up there at least. We were also supposed to create two poses illustrating our two acting beats and turn them in with our reference and planning page. This was extra fun (and useful) because AM gave us new rigs to use this term! I'd like to introduce Stella, who is feeling panicked and relieved in the following pictures, respectively: 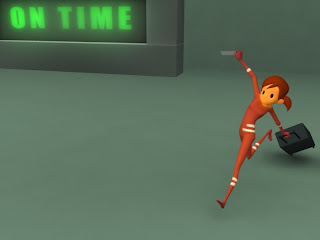 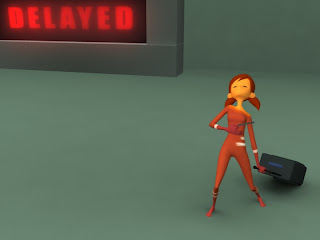 While I am gonna miss our old pal Stewie, I really, really like the new rigs. In addition to Stella, we got Stan, a cartoony Hulk type, and Sloan, a dog rig. These three are part of the new set of Tribe rigs, more of which are on the way soon. Exciting!

As far as Nick's notes on my shot, he was very pleased with my video reference. He felt it was a very genuine bit of acting (see, that year of drama in high school tooootally paid off) but he instructed me to leave out the "relieved" bit and just have her miss the flight altogether. Instead of going from "panicked" to "relieved", have her go from "hopeful" as she runs up to the board, thinking she might still make it, to "frustrated" when she realizes she has missed it. My reference was already sort of reading that way to him upon viewing it for the first time anyways. Plus, this will allow me to pull the camera in a little closer on Stella since the viewer no longer needs to read the words on the departure board, they just need to see that it's there.

I think Nick's instructions to simplify are going to help my shot a lot and it's going to be a lot of fun to animate. I was having a hard time getting the relief to read well anyways and I think the premise was maybe a touch too complicated. So, with that, I am going to start blocking my shot in for Week 2. Come back in a few days to check it out! See you then, lovelies.

Welcome to my blog. I hope you like animation and comics and food because there's quite a bit of that here. So get a snack and settle in.